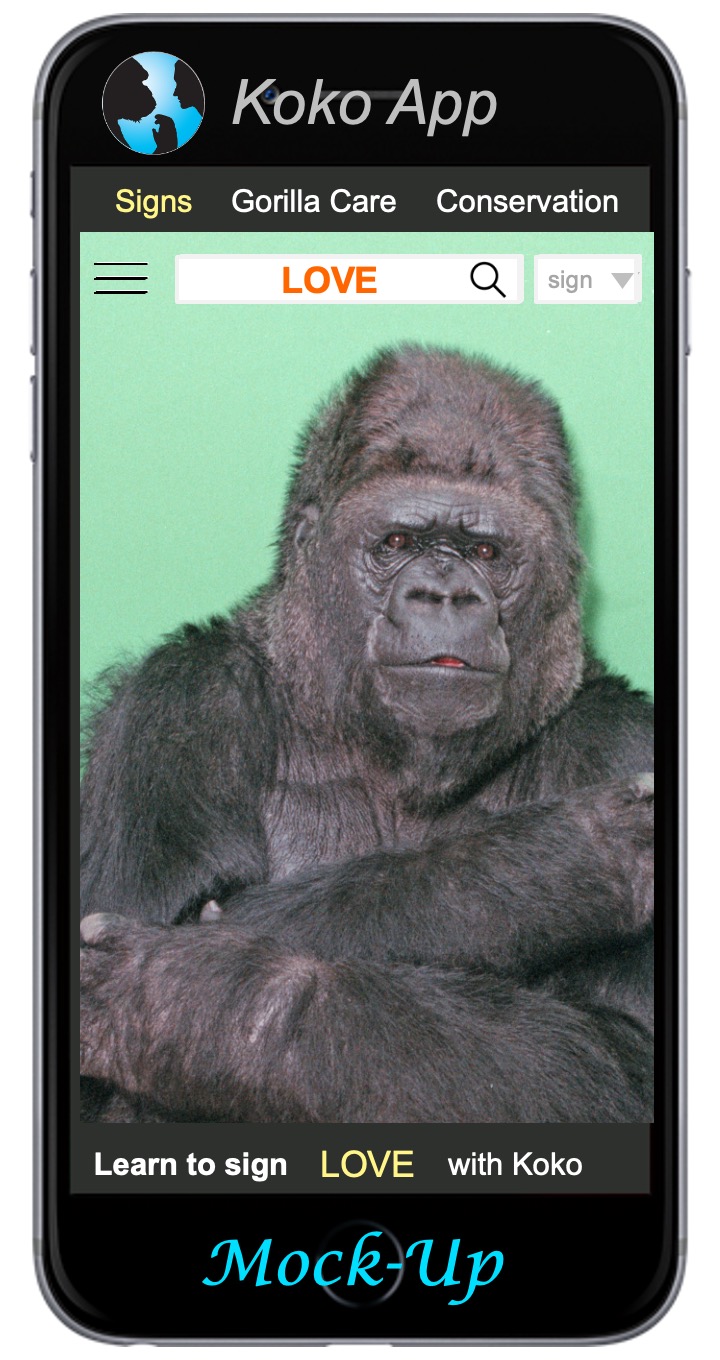 The Gorilla Foundation is looking for a leading-edge tech partner to help us develop the “Koko App” — as a way to save gorillas from extinction and inspire our children to become “Voices for Nature” and incorporate conservation into whatever career they choose.

The Koko App will help everyone (kids, adults, teachers, gorilla caregivers, conservationists, scientists …) learn American Sign Language (ASl) from the gorilla who mastered it in a few short years.  It will also reveal the mind of one of our closest living species to be much like ours, and thus invoke the empathy needed to save gorillas from extinction.

We have a mockup design and years of multimedia content and expertise.

However, we don’t have the expertise to develop a multi-platform phone app that will appeal and be intuitive to use by millions worldwide — from the US to Africa (where free-living gorillas are endangered, and cell phones are now highly accessible)

That’s where you can help!

Who is Koko and what is the Koko App?

Koko is the world’s most famous gorilla! Known mainly for her ability to communicate in sign language (she learned over 1000 signs, and understood even more spoken words), and her gentleness with (and empathy for) other species, she almost single-handedly changed the paradigm of gorillas from “King Kong” to “Koko’s Kitten.”

Koko with her (first kitten All Ball

Though Koko passed away in 2018, our 5-decade interspecies communication study with her produced an immense multimedia research archive.  The Koko App is designed to apply this rich archive to transmit her legacy to current and future generations of humans and other great apes.  In particular, it will enable humans and gorillas to learn sign language from Koko herself (an inspiring teacher) and to apply this language (which is valuable in its own right) to interpret Koko’s videos and books in ways that will expand interspecies empathy, promote conservation, and continue our dialogue with other animals.

The Koko App is also intended to help gorilla caregivers (at zoos) begin a dialogue with all captive gorillas, which will improve their care in captivity (by empowering them with more autonomy), enrich the “visitor” experience, create more gorilla ambassadors like Koko, and inspire children around the world to add their voices to Koko’s and preserve Nature.

If the Koko App is our “golden egg”, then the Koko Archive is the “goose that laid it”.  By mining the Koko Archive (digitizing/preserving decades of multimedia data, translating, analyzing and editing it), we can continue to expand the breadth and depth of the Koko App for years to come, and even involve the general public in a “crowd-sourced” effort to help with the research.  Thus, we have the content, the preliminary design, and even a mockup.  What we lack is the experience to convert the mockup into a world-class multi-platform app that can be used by millions around the world — including in African gorilla habitat countries, where cell phones are now abundant.

The following design mockup images indicate the kind of functions and features we’d like to offer in the KokoApp.

Each of these images represents a short video clip — from about 5 seconds each for individual sign demo clips, to about 30 seconds for Koko-and-Penny dialogue videos.

1) Look Up Signs by Name and Learn from Koko

How you can help

Get In Touch With Us!