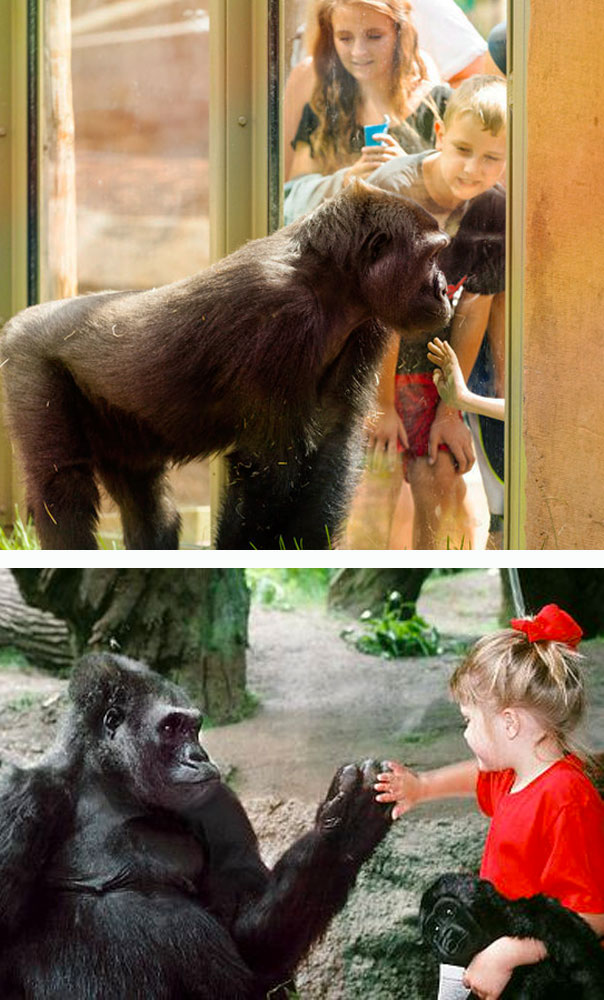 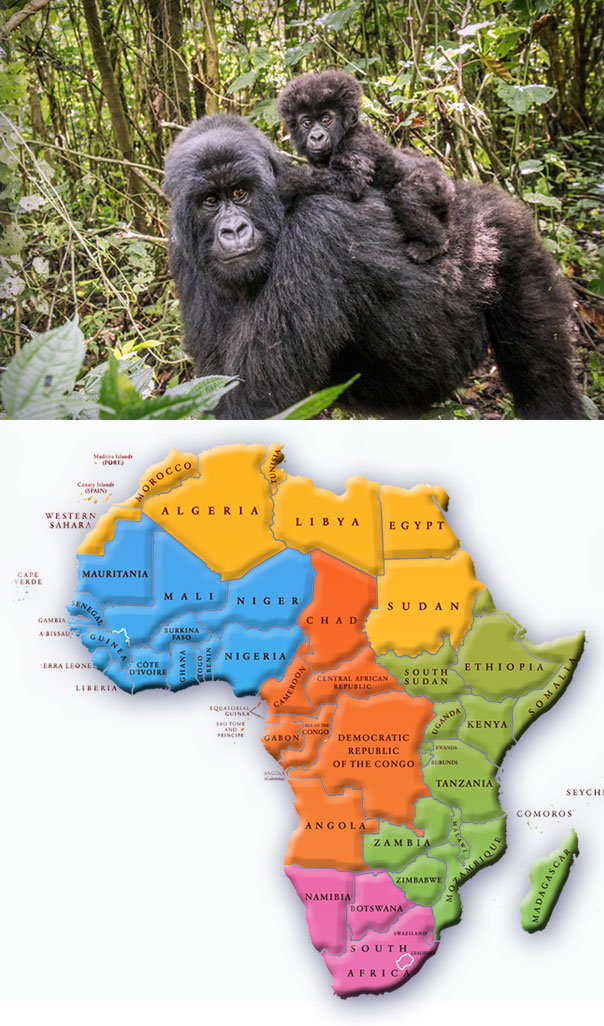 All gorillas are smart, sensitive, emotional and highly conscious beings—just like Koko!  But gorillas “in the wild” (living in 10 African countries shown on the map) are critically endangered and on the verge of extinction. Why? Because humans hunt them, destroy their habitats, and transmit human diseases to them! Even gorillas “lucky” enough to live in captivity (mostly in zoos) are forced to remain in perpetual “lockdown” with little freedom of choice. Visitors invade their privacy and often mock them. And because gorillas have feelings just like humans, it hurts them. Just as it hurts our feelings to be mocked and ridiculed.

And humans and gorillas depend on one another. They can help us if we care enough to help them. Gorillas are often called “gardeners of the jungle” because they eat seed-bearing fruits and vegetables and transport the seeds great distances. Rainforest “gardens” grow and flourish, nourishing the planet. Without gorillas and other great apes, these forests cannot survive. And our earth needs them! Trees and plants are the “lungs of the planet.” They produce oxygen to breathe and clear the air of dangerous carbon dioxide. Without them, this gas acts like an insulating blanket, making the planet hotter and the air less safe. It causes fires, floods and severe weather. It is called global warming, and it hurts all living things. 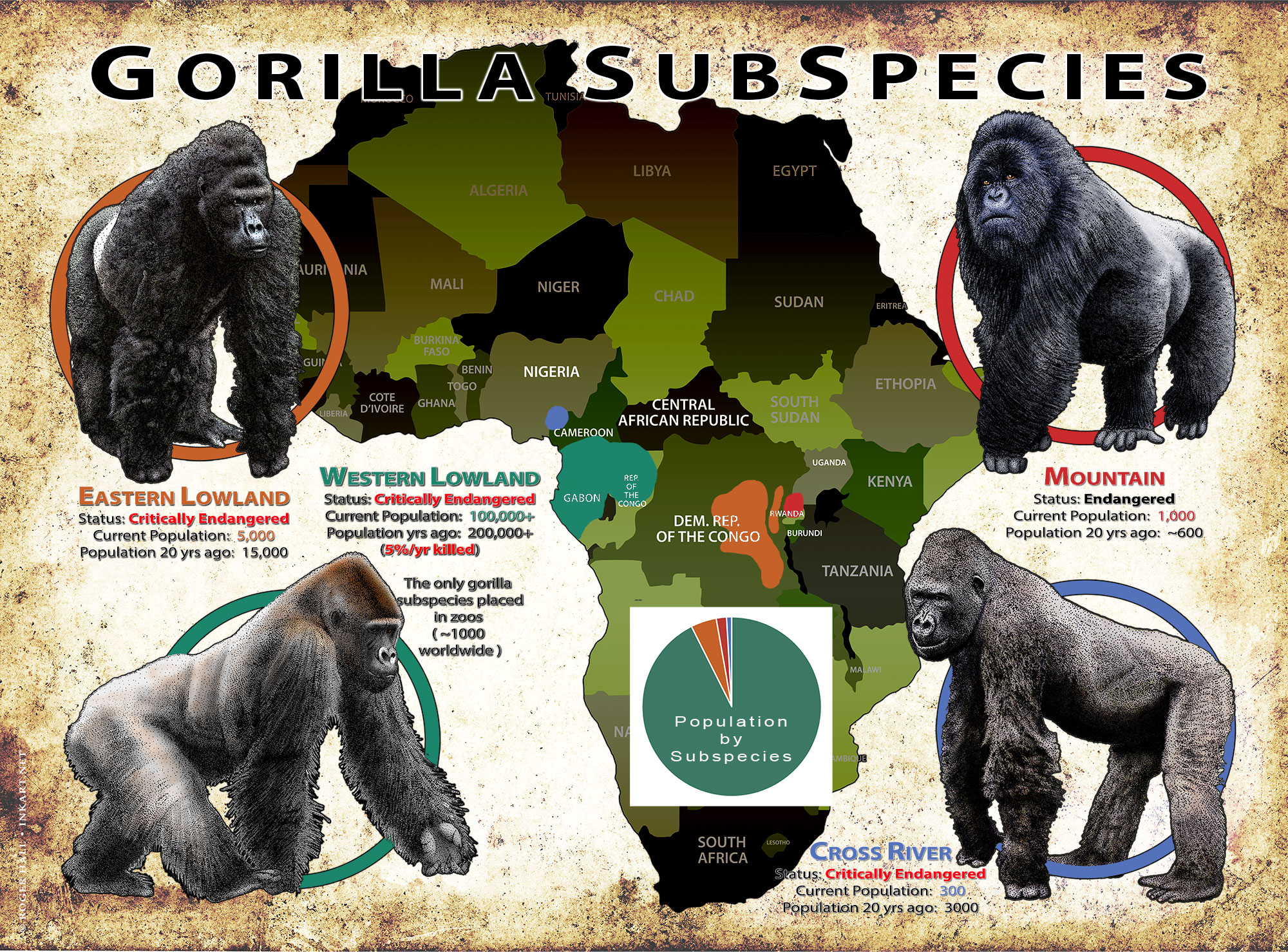 Gorillas (and other great apes) are being forced into extinction by human activities, and because gorillas (and other great apes) are such an important part of the ecosystem, we may be forcing ourselves into extinction.  In order to solve this problem, it’s important that we understand it.  First, there are 4 different subspecies of gorilla living in Africa (see the above map):

It doesn’t have to be this way. You, our Kids4Koko, can help save the planet by helping gorillas and Nature. You can tell people what you know now: that gorillas are smart, sensitive, emotional and highly conscious beings! They can learn to communicate with us using “our” sign language, and tell us what they need and want to feel safe and well and happy. Then hopefully we’ll all realize that great apes should be respected and protected, both in the wild and in captivity.

So…helping gorillas co-exist with humans and Nature means creating a healthier planet for ALL living things. That’s the solution.  And you are essential to making it work! 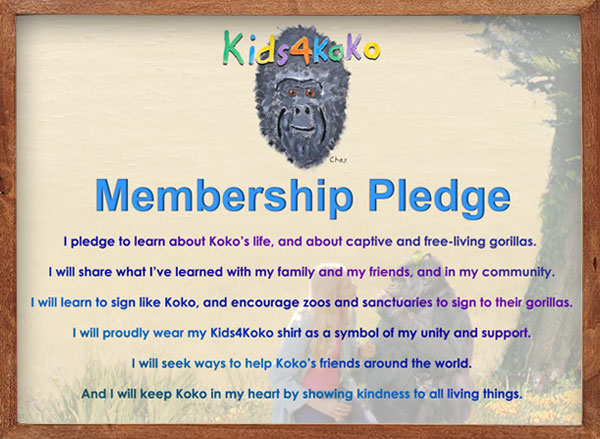 When you sign the Kids4Koko Pledge, you will become an official member of Kids4Koko, and receive regular email updates on the progress of Kids4Koko toward saving gorillas and Nature.  You will also be connected to a network of like-minded kids across the globe. 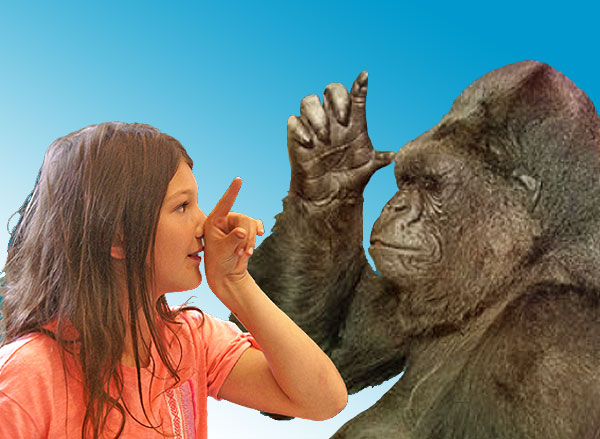 Visit the “Learn to Sign” section of Kids4Koko, and practice making Koko signs with your family and friends. Then watch your favorite Koko videos and “sign along!” Sign language can be a powerful way to communicate both within and between species. Share sign language with your friends and family, and we’ll share it with gorillas, and perhaps one day you too can signing with a gorilla like Koko. 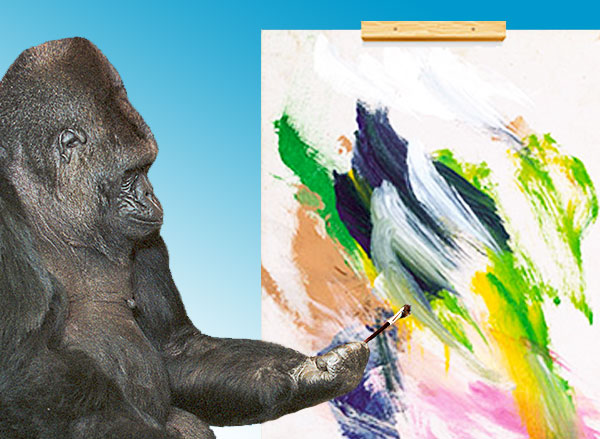 Visit the “Learn to Paint” section of Kids4Koko, and practice painting objects and expressing your emotions visually, with gorillas Koko and Michael as your guides. Learn to appreciate their paintings as well as your own hidden talents for art. Gorillas Koko and Ndume had an uncanny ability to paint beautiful paintings without seeming to give it much thought; they just enjoyed themselves and expressed their feelings. 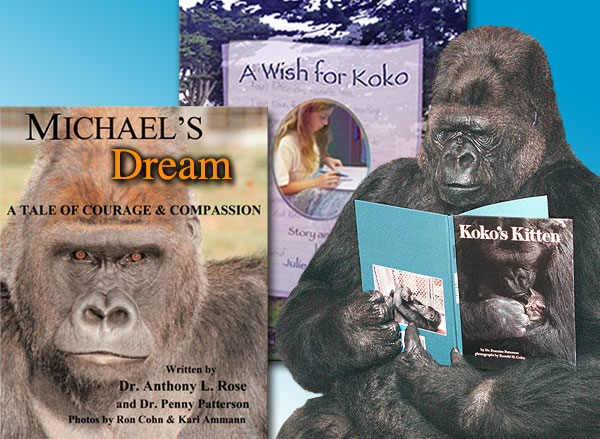 4) Read about Koko and Michael

Visit the “Read about Koko and Michael” section of Kids4Koko and read the eBooks, Koko’s Kitten, Michael’s Dream and the heartwarming and inspiring new book, A Wish for Koko, which describes a “possible” future in which we can all talk with great apes.  You’ll also find The Education of Koko and (soon) Koko’s Story, which collectively will make you feel like you knew Koko personally.  Click on the links to learn the signs that appear in some of the books. 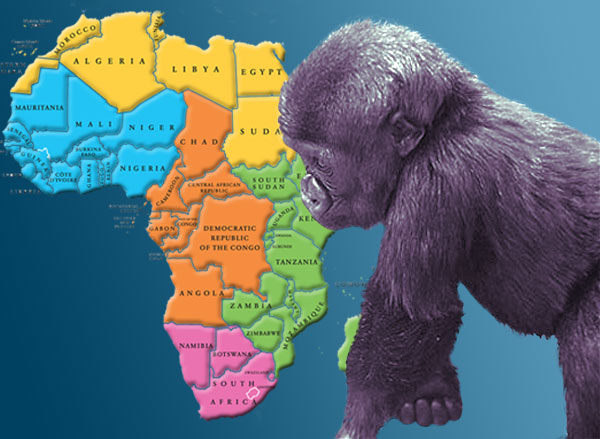 Click on the 2 images at the top of this page to learn more about captive (zoo) and free-living (wild) gorillas, and how their future depends on our attitudes and behaviors.  Gorillas in zoos are treated as if they have nothing in common with humans, and gorillas in the wild are treated as if they are expendable.  Both problems can be fixed by understanding how much like us they are. 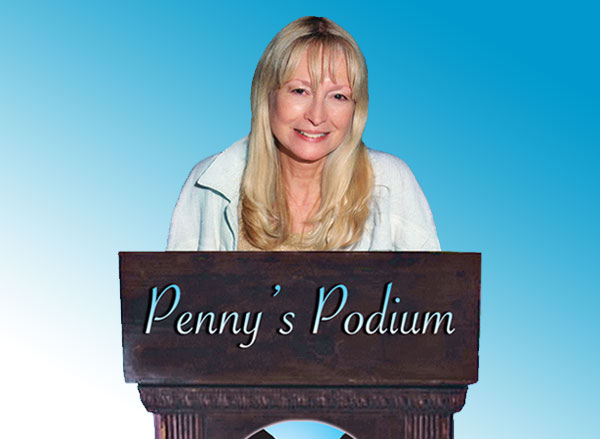 Visit “Penny’s Podium” to learn about the true nature of gorillas from Dr. Penny Patterson, who raised, taught, and learned so much from gorillas Koko, Michael & Ndume, and watch video interviews with her and other conservation champions and kids4koko. 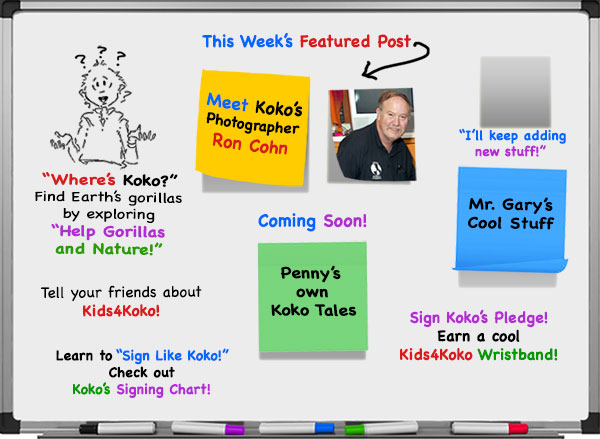 Visit “Mr. Gary’s Whiteboard” for gorilla facts and breaking news, and join the discussion about ways to help them by extending Koko’s voice, fully utilizing the Kids4Koko website, and new features planned for this website and the future “app” version of Kids4Koko. 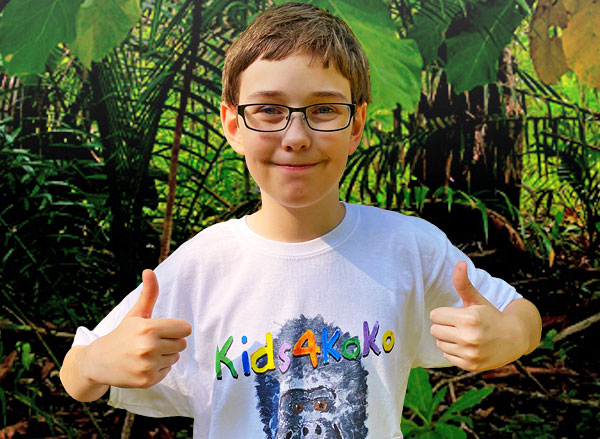 Meet some of the most active Kids4Koko — and Elders4Koko — in on this site, view their blogs, and create one of your own.  This is where we all put our heads together, young and old and come up with solutions for great apes and Nature.

Click here to listen to other Voices for Nature … 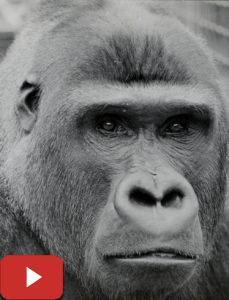 When Koko was 5 years old, a 3-year-old male gorilla named Michael came to live with her at The Gorilla Foundation. Michael was born in Cameroon, in Africa. He apparently saw his mother killed by poachers before he was rescued, and brought to a European Zoo. Later he came to the United States to live with his new friend, Koko. Michael learned nearly as many signs as Koko, and used them to tell very descriptive, sometimes sad stories. When a caregiver asked Michael to tell about his mother, he described a very disturbing event with “loud noises, cut neck, and hole in the ground.”

Click on the above video to see what Michael signed. Then read the full story in the eBook, Michael’s Dream, and learn what it means for gorilla conservation. You’ll find it in the “Reading” section of Kids4Koko.

We believe that as people learn about Michael and Koko through their gorilla stories and signs, they will gain empathy for gorillas worldwide. And they’ll want to help them survive and thrive and grow the rainforests. Humans and gorillas working together can keep this planet green and healthy for all species.

As a “Kid for Koko,” you will show people that treating other intelligent species and our planet with love and respect will create a bright future for everyone. If you agree, please sign the Kids4Koko Pledge and share it with your friends. Then you can download and print your own official copy! 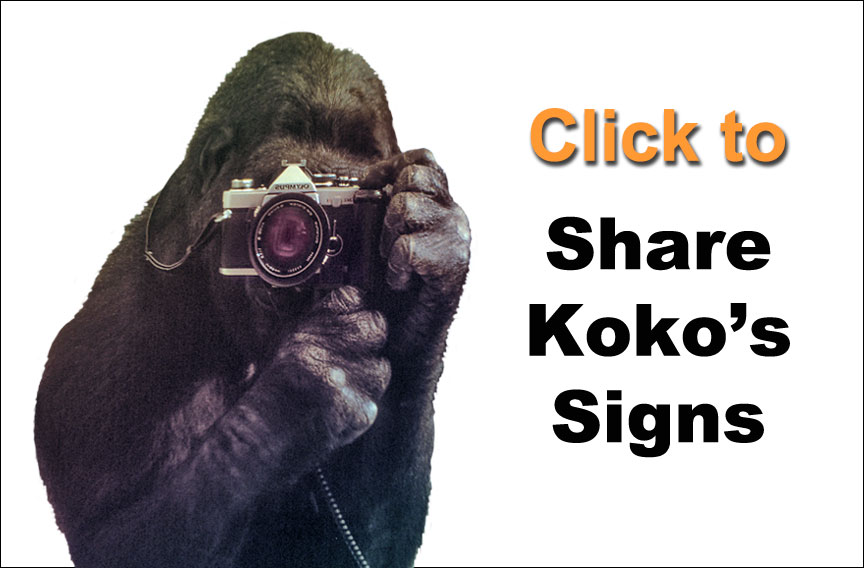 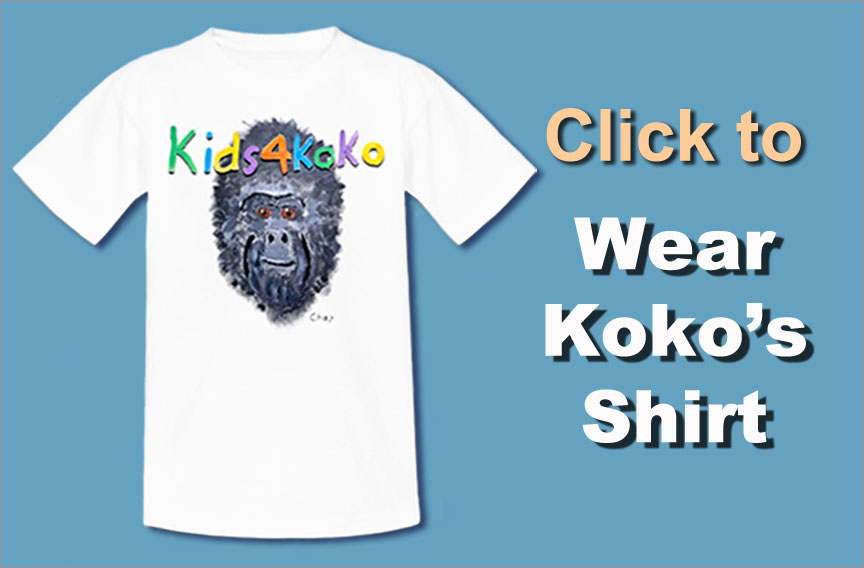 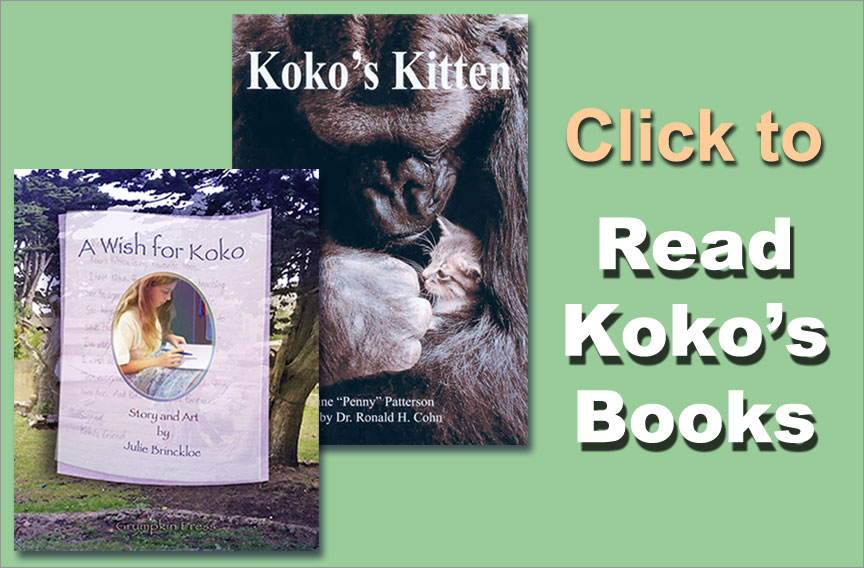 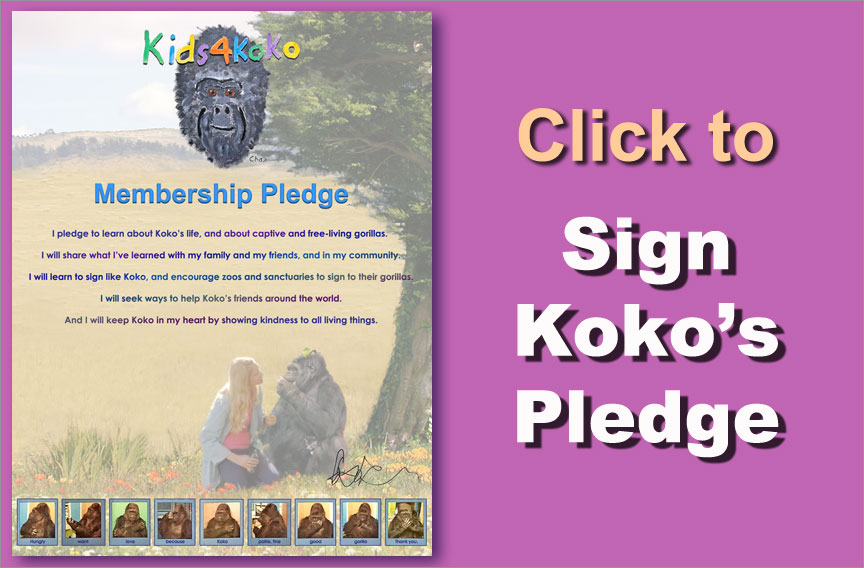