One morning, young Michael woke up screaming. His friends raced into his room and sat down beside him.  “What is upsetting you Michael?”  asked Penny.  Covered with sweat and shaking badly, Michael held tight to his adopted mother.  He was confused and upset.  Soon, Michael began to talk about his gorilla mother to Penny and to his caregivers.

One of the most remarkable conversations anyone ever had with Michael — or with any gorilla — took place with Barbar Weller. 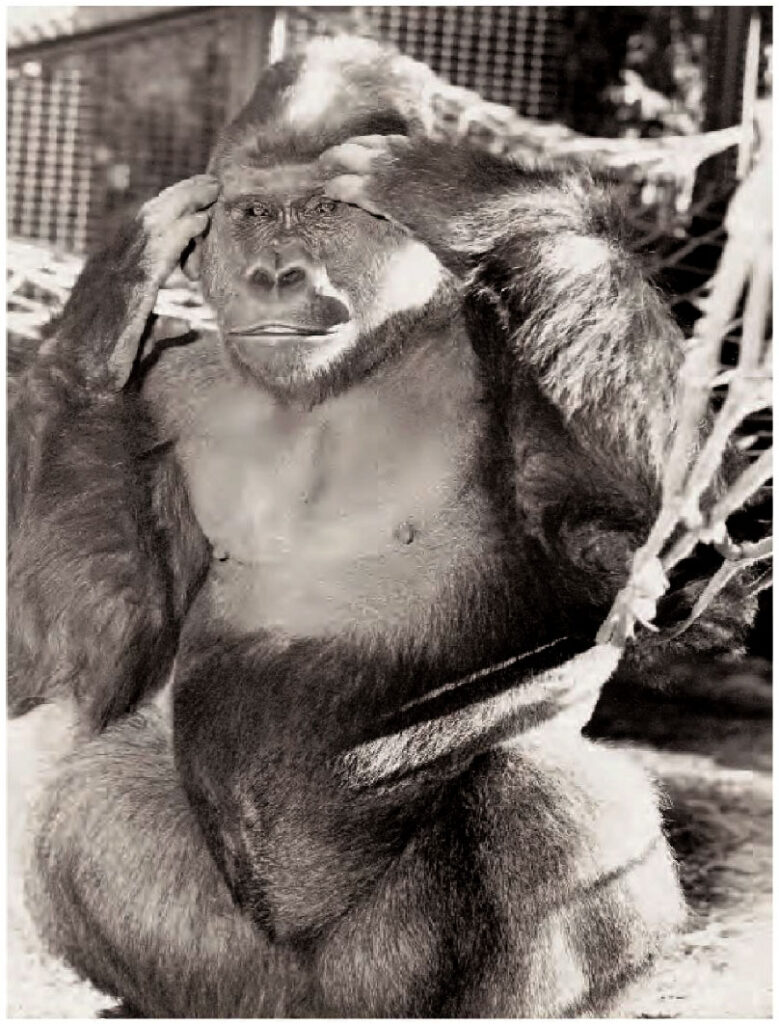 It began when Barbara asked Michael:  “Who is your mother?”  After a second try, Michael formed the signs, “GORILLA LIP”  Barbara told Mike how smart he was for knowing that his mother was a gorilla woman.  She then asked.  Who is your father?”  Mike paused and then replied, “FOOT GORILLA GOOD”  Foot is a word Mike often used to signify a man, and he used it here to identify his “GOOD” gorilla father.

Barbara asked if Mike knew his mother’s name.  He answered, “GOOD.  NICE GORILLA.”  The sign “Good” had been used often for “mother” and for Penny.  She then tried something different, and asked him if he remembered when he was a baby with his mother.

Mike’s answer came quickly, “BABY KNOW GOOD.  GORILLA — GOOD.”   Barbara then asked him “what happened when you were a baby gorilla?”  Mike seemed anxious, and surprisingly answered, “BIG-TROUBLE DO!”

When Barbara asked Mike “Why big trouble when you were a baby?” he replied hastily.  “CHASE CHASE GORILLA DO RED DO.”  Mike often used the word “RED” to indicate anger and sometimes to express fear.  “Who chased the gorilla baby?”  she asked.  Mike said, “VISIT FOOT” and then pointedly hit his foot with his fist.

This indicated that a strange man, a visitor, was involved.  She asked him, “Did Foot chase you when you were a baby?”  Mike replied vigorously that the man (FOOT) had done something to his mother (GOOD), not to him.  He signed “FOOT” and then forcefully signed “GOOD” — his name for his mother.

Looking for more detail, she asked Michael “What did Foot do to you and your gorilla mother?  Mike became agitated and signed, “DO OUT.  GORILLA.  BIG-TROUBLE.”  There was little doubt that something very disturbing had been done, particularly to his mother, and Michael was trying hard to describe it.

Barbara asked him specifically, “What happened to your mother?”  He surprised her and answered, “EAT.”  It was becoming more clear that the man whom Mike labeled FOOT had done something awful to Michael’s mother — had the stranger “EATEN” her?   “What do you mean by ‘EAT’?”  Barbara asked.

“SQUASH GORILLA” he signed.  It was at this point that Barbara began to realize that Mike was reporting his memories of his mother’s murder by hunters in the rain forest.

She asked him once again, “What happened to your mother?”  This time he replied, “SORRY.  DO GOOD.  DO ROCK.”  Confused, she asked.  “What happened with a rock?”  Mike answered, “DO ROCK.  GORILLA.  SORRY.”